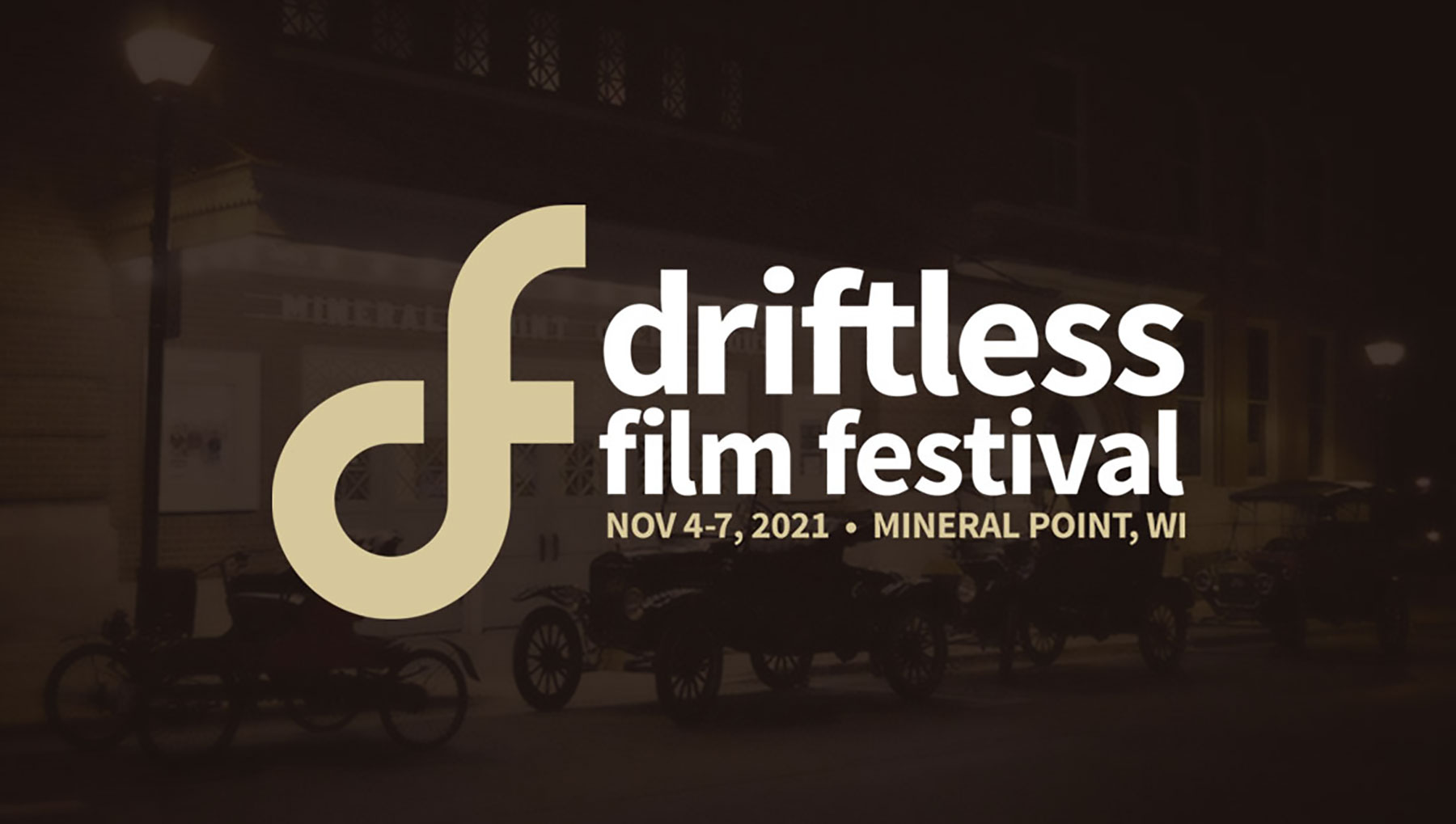 For twelve seasons, the Driftless Film Festival has brought together the best of new independent cinema with the landscape, artistic energy, and local atmosphere of Southwest Wisconsin. Coming back after a one-year COVID-19 imposed hiatus, DFF continues to provide a one-of-a-kind cinematic experience for audiences and filmmakers alike.

This year’s festival promises to keep up the DFF’s mission of providing entertaining and thoughtful independent films to the Driftless area. From provocative documentaries to groundbreaking narratives, DFF 2021 will be everything that’s expected from this local institution.

Festival passes are available by clicking this link. Tickets for individual screenings will go on sale soon.

Founded in 2009, DFF was born of a love for independent films, an appreciation of the unusual region, and the joy of spending a weekend immersed in the charm of Mineral Point’s galleries, shops, restaurants, and bars. It is this delightful marriage of place and cinematic story that is the core of the DFF vision today.

Read on for a list of feature presentations in this year’s DFF. For a complete schedule, including films and special events, go to driftlessfilmfestival.com/schedule.

In 1945, just days before the end of World War II, 27-year-old fighter pilot Loren Hintz was shot down over rural Italy, leaving behind his pregnant wife and young daughter. More than 70 years later, Hintz’s grandson, Hans Wronka, leads an effort to recover his remains and finally have them laid to rest, with the support of professional researchers, aviators, and Italian archeologists (ADA).

THE PLACE THAT MAKES US

Filmed over the course of three years, this documentary film is an intimate and inspiring portrait of Youngstown, Ohio, a quintessential post-industrial American city, seen through the efforts of a new generation of residents who have chosen not to abandon their hometown, as so many have, but to stay, rebuild and make a life for themselves. Interweaving archival footage and home movies of a prosperous but forgone past, this film is a poetic testimony to the profound resilience and dedication it takes to change a community.

This intimate portrait film follows master falconer Rodney Stotts on his mission to build a bird sanctuary and provide access to nature for his stressed community. The Falconer weaves Rodney’s present-day mission with the story of his past, both of which are deeply rooted in issues of social and environmental injustice, and consistently orients the viewer to his worldview: nature heals. This is a story of second chances: for injured birds of prey, for an abandoned plot of land, for a group of teenagers who have dropped out of high school, and for Rodney himself.

WHO YOU THINK I AM

AT THE VIDEO STORE

An offbeat and bittersweet documentary featuring Bill Hader, John Waters, Lance Bangs, Nicole Holofcener, Charles Mudede, Gus Van Sant, Thelma Schoonmaker, and an entire community of lovable weirdos. Structured around original video store-inspired songs, the film is a loving ode to the dying art of connection and curation. Equal parts personal essay, intense rumination, and playful satire, At The Video Store is an ode to the death (and life!) of the American video store.

NO STRAIGHT LINES: THE RISE OF QUEER COMICS

No Straight Lines tells the story of five scrappy and pioneering cartoonists who depicted everything from the AIDS crisis, coming out, and same-sex marriage, to themes of race, gender, and disability. They tackled the humor in queer lives in a changing world, and the everyday pursuits of love, sex, and community. Their work is funny, smart, and profound, and provides a unique, uncensored window into LGBTQ lives from the 1970s onward, beginning at a time in which there was no other genuine queer storytelling in popular culture. Equally engaging are their personal journeys, as they, against all odds, helped build a queer comics underground that has been able to grow and evolve in remarkable ways.

This year’s featured titles include:

CECILY AND LYDIA AT THE WAYPOINT

On a lush, but lonely earth, Cecily walks. Alone in her house, Lydia waits. One balmy afternoon, the two women meet.

Wisconsin premiere! of production filmed in Dodgeville and other Driftless Area locations.

FOR THE LEFT HAND

A documentary produced by Kartemquin Films about the inspiring pianist Norman Malone. At age 5, Norman discovered he was a natural at the piano. Tragically, when Norman turned 10, his father attacked him with a hammer to the head, leaving him paralyzed on his right side. Undaunted, Malone began a lifelong quest to reclaim his place at the piano, mastering the most difficult music ever written for left hand alone – and never telling anyone of his deepening virtuosity. Not until he was 78 did Malone reveal his story (to the Chicago Tribune), prompting belated invitations to perform across America. Nearly 70 years after his tragic attack, Malone launches a much-delayed, triumphant concert career.

From award-winning director Ben Lewin (The Sessions, The Catcher Was A Spy) Falling For Figaro follows a brilliant young fund manager named Millie (Danielle Macdonald, Patti Cake$, Dumplin), who quits her job and ends things with her longterm boyfriend in order to fulfill her dream of becoming an opera singer — in the Scottish Highlands. She begins intense vocal training lessons with renowned but fearsome singing teacher and former opera diva Meghan Geoffrey-Bishop (Joanna Lumley). It is there she meets Max, another of Meghan’s students who is also training for the upcoming “Singer of Renown” contest. The competition between Millie and Max gradually evolves into something different and deeper.

A celebration of America’s grass roots musical movement: Gospel. Through interviews and performances, this underappreciated world comes alive, filled with emotion and power. Tucked away in the small churches of Milwaukee, WI are some very large musical talents. They provide a voice for the voiceless and speak directly to the heart. In this celebration of passion and talent, we’ll meet the unreserved singers and personalities and learn what draws them to this emotional and uniquely American art form.